When I first started BJJ, there was only two blue belts in the whole state (that I was aware of). The access to coaches and technique was somewhat more limited that it is now and it took me around four years to get my blue belt.

That belt and every belt since, I have felt I was not ready for. Not ready to bear the load of the responsibility of representing that grade, not ready for the onslaught of lower belts looking to get a scalp, and not ready to defend against others already at that grade that I looked up to and respected as proficient and skilled fighters.

As I have said so many times in regard to BJJ, “You can and will be tested, every time you get on the mats”. There is nowhere to hide, not on past achievements, and not on the rank you wear.

A coach I once had, had a saying, “You don’t earn the belt, you become the belt”. This rings true to me. You are not being awarded an achievement certificate, as congratulations that you have past some test. You are being recognised as having climbed a mountain, and this is our vote of confidence that you are now ready to begin the journey of climbing the next mountain.

On the issue of tips (or degrees as they are called in the IBJJF Grading System). The difference between a white belt and a four stripe white belt is magnitudes apart, whereas the difference in purple belts may not be so striking. I was thinking back to when I had my brown belt, and only ever remember having a single stripe on it, so I went and dug it out, and found that it had two. This didn’t stop me progressing to black belt (incidentally that took about three and a half years from brown). Don’t be too worried about stripes as you progress through the belts, as all too soon you will have that vote that you are ready for your next mountain. 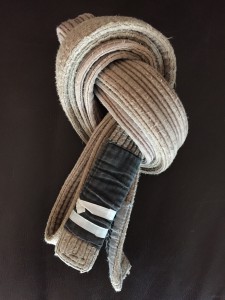